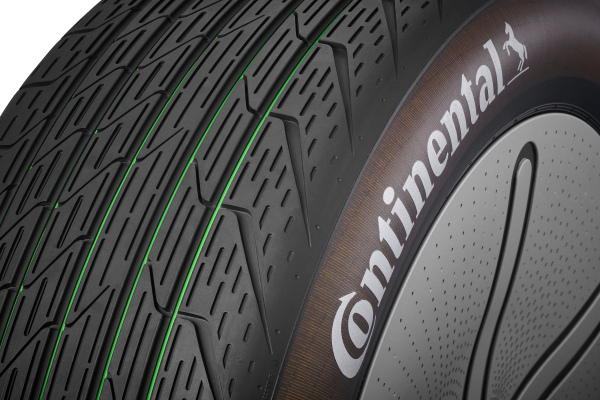 Many efforts are underway to reduce the environmental impact of cars, but what about the tires those cars ride on? Continental thinks it might help. Roadshow reports the company has introduced the Conti GreenConcept (yes, a concept tire) where more than half of the materials are “traceable, renewable and recycled.” You can even renew the natural rubber tread with little trouble — not a completely new idea, but refreshable treads have generally been reserved for large commercial trucks. Three renewals would be enough to ensure the material used for casing is cut in half relative to the total mileage.

About 35 percent of the materials are renewables, including dandelion rubber, silicate made from rice husk ash and a string of vegetable oils and resins. Another 17 percent is polyester yarn made from recycled PET bottles, reclaimed steel and recovered carbon black.

The design should improve the efficiency of the cars themselves, Continental added. New casing, sidewall and tread patterns make the GreenConcept about 40 percent lighter than a conventional tire at about 16.5lbs, That, in turn, leads to 25 percent lower rolling resistance than the highest-rated tires in the EU. Continental estimates you’d get six percent more range from an electric vehicle.

While you might not outfit your car with these exact tires any time soon, this is more than just a thought exercise. Continental plans to gradually deploy its recycling technology starting in 2022, including the production of tires using recycled bottles.

Efforts like the Conti GreenConcept are partly meant to burnish Continental’s public image. It wants to be the most environmentally responsible tire company by 2030, and become completely carbon-neutral by 2050 “at the latest.” However, it also hints at a more holistic approach to eco-friendly cars where many components, not just the powertrain, are kinder to the planet.

Study finds half of Americans get news on social media, but percentage has dropped

A new report from Pew Research finds that around a third of U.S. adults continue to get their news regularly from Facebook, though the...

When you are the founder of a young startup, it is always very hard to gauge the right amount of effort to dedicate to marketing. Botch it...

The next healthcare revolution will have AI at its center

Kai-Fu Lee Contributor The global pandemic has heightened our understanding and sense of importance of our own health and the...

iOS 15 adds all the little features that were missing

The release of iOS 15 should be a major event for mobile operating systems. And yet, this year, there’s no breakthrough feature or...

The decreasing cost of launch and a slew of other tech innovations have brought about a renaissance in geospatial intelligence, with...