This morning Metafy, a distributed startup building a marketplace to match gamers with instructors, announced that it has closed an additional $5.5 million to its $3.15 million seed round. Call it a seed-2, seed-extension or merely a baby Series A; Forerunner Ventures, DCM and Seven Seven Six led the round as a trio.

Metafy’s model is catching on with its market. According to its CEO Josh Fabian, the company has grown from incorporation to gross merchandise volume (GMV) of $76,000 in around nine months. That’s quick.

The startup is building in public, so we have its raw data to share. Via Fabian, here’s how Metafy has grown since its birth: 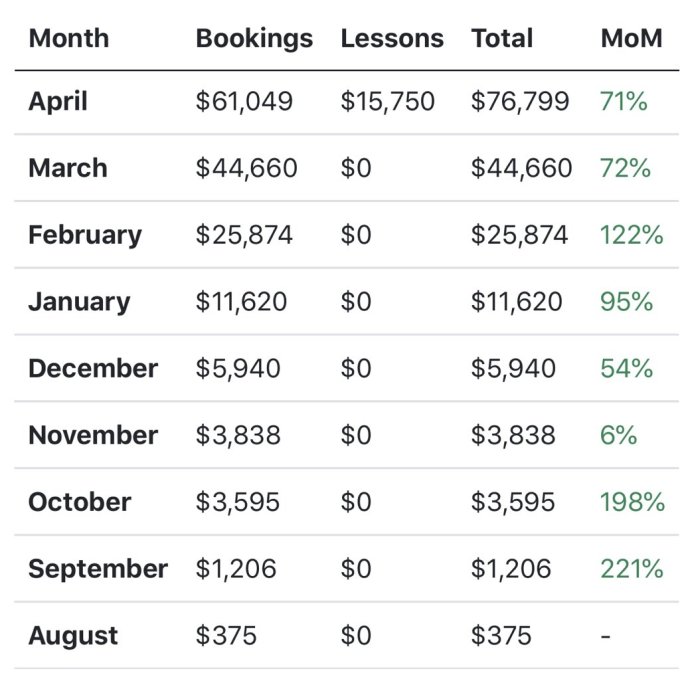 From the company. As a small tip, if you want the media to care about your startup’s growth rate, share like this!

When TechCrunch first caught wind of Metafy via prior seed investor M25, we presumed that it was a marketplace that was built to allow esports pros and other highly capable gamers teach esports-hopefuls get better at their chosen title. That’s not the case.

Don’t think of Metafy as a marketplace where you can hire a former professional League of Legends player to help improve your laning-phase AD carry mechanics. Though that might come in time. Today a full 0% of the company’s current GMV comes from esports titles. Instead, the company is pursuing games with strong niche followings, what Fabian described as “vibrant, loyal communities.” Like Super Smash Brothers, its leading game today in terms of GMV generated.

Why pursue those titles instead of the most competitive games? Metafy’s CEO explained that his startup has a particular take on its market — that it focuses on coaches as its core customer, over trainees. This allows the startup to focus on its mission of making coaching a full-time gig, or at least one that pays well enough to matter. By doing so, Metafy has cut its need for marketing spend, because the coaches that it onboards bring their own audience. This is where the company is targeting games with super-dedicated user bases, like Smash. They fit well into its build for coaches, onboard coaches, coaches bring their fans, GMV is generated model.

Metafy has big plans, which brings us back to its recent raise. Fabian told TechCrunch any game with a skill curve could wind up on Metafy. Think chess, poker or other games that can be played digitally. To build toward that future, Metafy decided to take on more capital so that it could grow its team.

So what does its $5.5 million unlock for the startup? Per its CEO, Metafy is currently a team of 18 with a monthly burn rate of around $80,000. He wants it to grow to 30 folks, with nearly all of its new hires going into its product org, broadly.

TechCrunch’s perspective is that gaming is not becoming mainstream, but that it has already done so. Building for the gaming world, then, makes good sense, as tools like Metafy won’t suffer from the same boom/bust cycles that can plague game developers. Especially as the startup becomes more diversified in its title base.

Normally we’d close by noting that we’ll get back in touch with the company in a few quarters to see how it’s getting on in growth terms. But because it’s sharing that data publicly, we’ll simply keep reading. More when we have a few months’ more data to chew on.

In its first funding in 7 years, profitable fintech Lower raises $100M Series A led by Accel

Lower, an Ohio-based home finance platform, announced today it has raised $100 million in a Series A funding round led by Accel. This round...

Vercel, the company behind the popular open-source Next.js React framework, today announced that it has raised a $102 million Series C...

An international coalition of consumer protection, digital and civil rights organizations and data protection experts has added its voice...

Aircall has raised a $120 million Series D round led by Goldman Sachs Asset Management. Following today’s funding round, the company has...

Sohail Prasad and Samvit Ramadurgam are cofounders who met during Y Combinator’s 2012 summer batch and went on to cofound Forge, which...