Welcome back to Human Capital! As many of you know, Human Capital is a weekly newsletter where I break down the latest in labor, as well as diversity and inclusion in tech. It’s officially available as a newsletter, so if you want this content when it comes in hot Fridays at 1 p.m. PT, subscribe here.

Because the election is coming up, this edition focuses heavily on California ballot measure Proposition 22. The TL;DR is that gig companies like Uber, Lyft and DoorDash really want to keep classifying their drivers and delivery folks as independent contractors, so they put millions of dollars into this ballot measure. This week, we saw Prop 22-related complaints and lawsuits filed, and an appeals court judge decide Uber and Lyft must reclassify their drivers. We also heard directly from gig workers on both sides about why they do or do not want to be independent contractors.

But we’ll also look at SoftBank’s first investment from its D&I fund, Pinterest’s addition of a new Black board member and more. Let’s jump in.

Uber and Lyft must classify drivers as employees, court rules

But. And this is a big but. Uber and Lyft will likely appeal this decision and it’s also possible this decision won’t matter depending on how Prop 22 goes. We’re just a couple of weeks out from Election Day and this decision has a thirty-day hold on it once the remittitur goes into effect. And that remittitur has not yet been issued.

Throughout the case, Uber and Lyft have argued that reclassifying their drivers as employees would cause irreparable harm to the companies. In the ruling today, the judge said neither company would suffer any “grave or irreparable harm by being prohibited from violating the law” and that their respective financial burdens “do not rise to the level of irreparable harm.”

Additionally, there is nothing in the preliminary injunction, according to the judge, that would prevent Uber and Lyft from offering flexibility and independence to their drivers. Lastly, the judge said Uber and Lyft have had plenty of time to transition their drivers from independent contractors to employees, given that the key case in passing AB 5, the gig worker bill that spurred this lawsuit, was decided in 2018.

Amazon workers protest for time off to vote

Ahead of Election Day, Amazon employees protested at the company’s headquarters in Seattle for paid time off to vote. In a statement to GeekWire, Amazon said employees that don’t have enough time off can request additional, excused time off.

“The number of hours and pay provided to employees varies by state in line with local laws,” the spokesperson said.

According to GeekWire, Amazon notified managers that they should approve PTO requests for voting.

Tech companies that are giving employees paid time off for Election Day include Salesforce, Apple (hourly employees get four hours), Facebook, Twitter, Uber and others.

Opponents of California’s Proposition 22  filed a complaint this week with the United States Postal Service. The No on 22 campaign alleges the Yes side is not eligible for a nonprofit postal status and is asking USPS to revoke its permit.

In a statement to TC, Yes on 22 spokesperson Geoff Vetter said, “As a 501(c)(4) organization, Yes on 22 is eligible for the appropriate nonprofit postage rates with the USPS, which we applied for and were granted by the U.S. Postmaster.”

Uber is facing a class-action lawsuit over Proposition 22 that alleges the company is illegally coercing its drivers to support the ballot measure that seeks to keep workers classified as independent contractors. The suit was brought forth by two Uber drivers, Benjamin Valdez and Hector Castellanos, as well as two California nonprofit organizations, Worksafe and Chinese Progressive Association.

In the suit, the plaintiffs argue Uber has encouraged its drivers and delivery workers to support Prop 22 via the company’s driver-scheduling app.

“This is an absurd lawsuit, without merit, filed solely for press attention and without regard for the facts,” Uber spokesperson Matt Kallman said in a statement to TechCrunch. “It can’t distract from the truth: that the vast majority of drivers support Prop 22, and have for months, because they know it will improve their lives and protect the way they prefer to work.”

Ahead of the protests, Shipt shopper and organizer with Gig Workers Collective Willy Solis told me his goal was to bring attention to the new pay structure Shipt began rolling out and how shoppers “are getting paid less for more effort.”

6 companies, 5 days, 5 states, 6,500+ miles, 3 time zones, 3 direct actions, and 2 podcasts. Gig workers in California, the South, and the Midwest all turned out and turned up to flex that good good worker power. Every cell in my body is steeped in solidarity.

Gig workers speak for and against Prop 22

TC relaunched the Mixtape podcast and as part of that, Henry Pickavet and I chatted with Vanessa Bain, an Instacart shopper who opposes Prop 22 and Doug Mead, a gig worker who supports Prop 22. The whole episode is worth listening to, but here are some key nuggets from them. First up, Bain:

“If all it takes is putting the hiring process and the bossing into an app on your phone to rewrite labor laws, every company on the planet is going to be doing that. There’s so much more, unfortunately, at stake here than just Uber and Lyft and ride share and grocery delivery and how you’re going to get your DoorDash orders. Literally the future of labor is at stake.”

You can check out the full episode here.

SoftBank invests in Vitable Health as part of D&I fund

SoftBank’s $100 million Opportunity Fund, which it formed in June to invest in founders of color, made its first bet on Vitable Health. The company focuses on providing health insurance to underserved and low-income communities.

Smith is the former EVP of Programming and Strategy at Disney’s ABC Family and Freeform, as well as former president of Comcast NBCUniversal’s Style Media.

Here’s an updated look at Black board member representation at major tech companies. 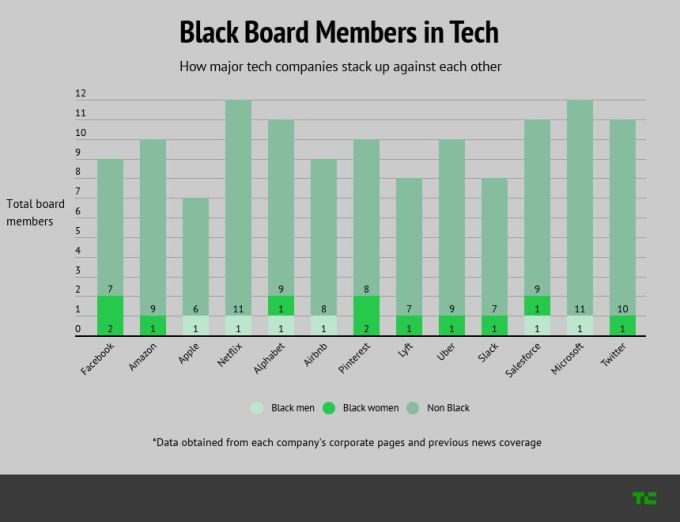 Netflix is launching a tech bootcamp for HBCU students

Netflix announced a virtual HBCU Boot Camp for students from Norfolk State University, a historically black university in Virginia. Specifically, it’s open for current students and alumni from the classes of 2019 and 2020.

In partnership with online education platform 2U, the boot camp will teach 130 students Java engineering, UX/UI design and data science over the course of 16 weeks beginning in January. A bonus is that members of Netflix’s data science, engineering and design teams will serve as mentors to the students.

Snowman, the studio behind Alto’s Adventure and others, launches a kids app company, Pok Pok

Snowman, the small studio behind award-winning iOS games Alto’s Adventure, Alto’s Odyssey, Skate City and others, is spinning out a new...