Consumers spent a record $28 billion in apps in Q3, aided by pandemic

Mobile usage continues to remain high amidst the COVID-19 pandemic, which has prompted social distancing measures and lockdown policies, and has pushed consumers to connect online for work, school and socializing. This, in turn, has helped drive record spending in apps during the quarter, as well as a huge surge in time spent in apps. According to a new report from App Annie, consumers in the third quarter downloaded 33 billion new apps globally and spent a record $28 billion in apps — up 20% year-over-year. They also spent more than 180 billion collective hours each month of July, August and September 2020 using apps, an increase of 25% year-over-year.

The mobile data and analytics firm had earlier suggested that the COVID-19 pandemic would have a long-lasting impact on consumer mobile behavior, as it advanced mobile by at least two to three years ahead of pace. This continued to be true in the third quarter, with all major mobile trends seeing increases. 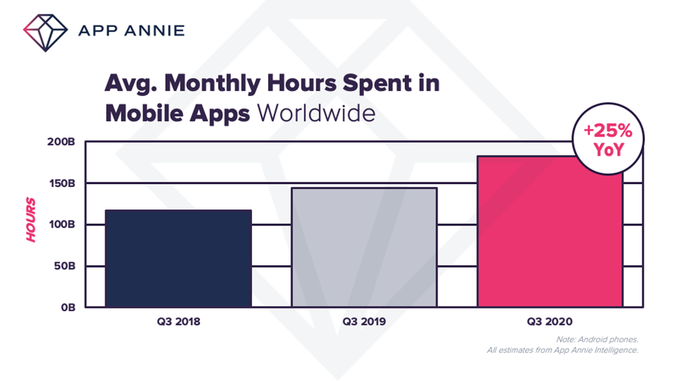 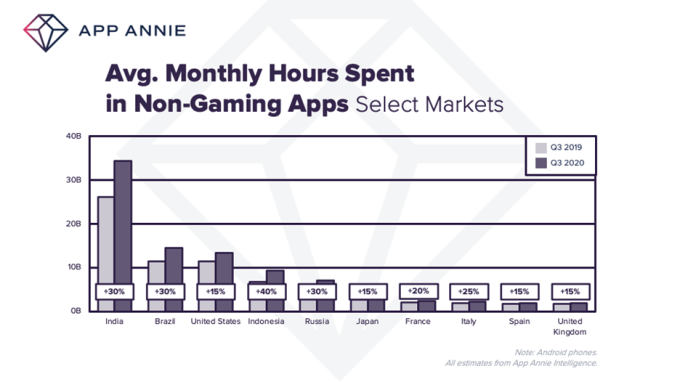 Google Play downloads grew 10% year-over-year, accounting for 25 billion of the total 33 billion new downloads in the quarter, while iOS accounted for nearly 9 billion downloads — up 20% year-over-year. Non-gaming apps on Google Play were 55% of those downloads, while on iOS the figure was a slightly higher 70%. 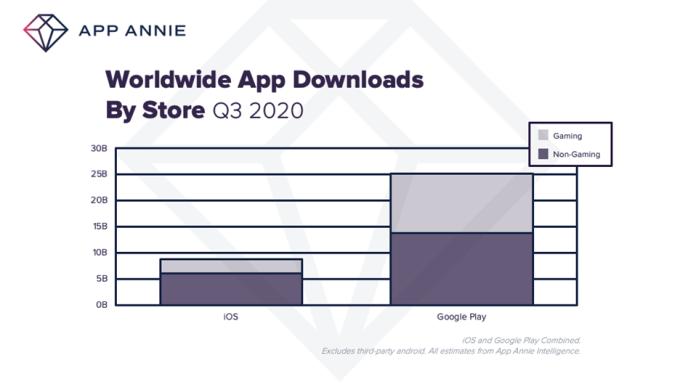 Some of the download growth was directly tied to the pandemic.

As students in Mexico returned to remote learning, for example, downloads of Education apps grew 25% and Libraries & Demo apps grew 270%. As U.S. consumers turned to the outdoors to find activities amid lockdowns and business closures, Travel, Navigation and Weather apps all saw strong growth of 50%, 25% and 15%, respectively.

Consumers also spent a record $28 billion in apps in Q3 2020 — the largest quarter to date.

On iOS, spend grew 20% year-over-year to $18 billion, while Google Play saw a 35% year-over-year increase to over $10 billion. Non-gaming apps accounted for 35% of that spend on iOS and 20% on Google Play, largely thanks to subscriptions. 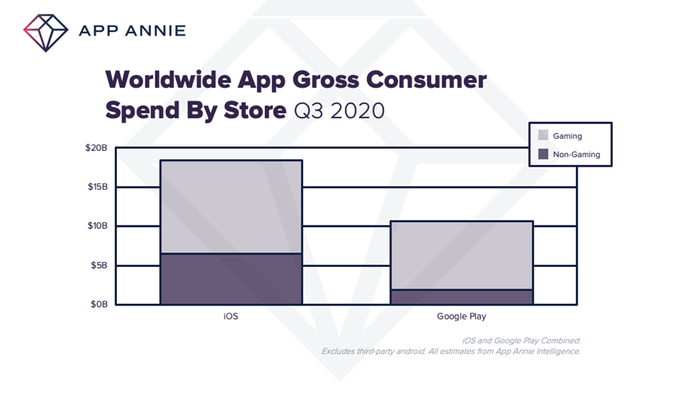 Top markets for consumer spend included the U.S. and Japan across both app stores, with the addition of South Korea for Google Play.

The increased consumer spending on apps could also be seen as being tied to the pandemic and its impacts. For example, Games, Social and Entertainment were the largest categories by consumer spend on Google Play. And within the Entertainment category, spend was driven by streaming apps, including Disney+, Twitch, Globo Play and HBO Max — apps that may have benefited from more consumers staying at home for entertainment.

On iOS, Games, Entertainment and Photo and Video were the top three categories by consumer spend. As sports returned to television in the U.S., spending in sports apps grew 55% from the prior quarter. TikTok, meanwhile, became the No. 2 app by consumer spend outside of games, thanks to increases in virtual tipping for streamers. However, the largest quarterly growth in spending, outside of games, was driven by the comics app piccoma, YouTube, Tinder and AbemaTV. 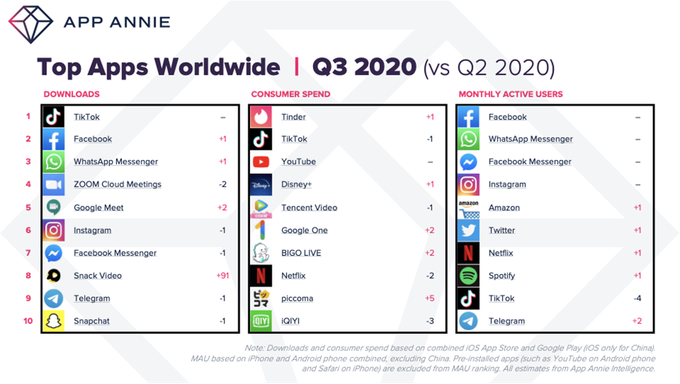 Tinder indicated some resiliency in Q3. Despite the pandemic, the app jumped up one position to reach No. 1 by consumer spend. Disney+ also jumped up a spot to reach No. 4.

In terms of monthly active users, however, Facebook still dominated the top charts, claiming the No. 1 through No. 4 positions for Facebook, WhatsApp, Messenger and Instagram, respectively. The next most used apps were Amazon, Twitter, Netflix, Spotify, TikTok and then Telegram. The latter broke into the top 10 for the first time, after jumping up two ranks from Q2.

Gaming also continues to get a boost from the pandemic, with weekly downloads hovering around 1 billion for the second straight quarter as consumers on lockdown look for entertainment — up 15% year-over-year. 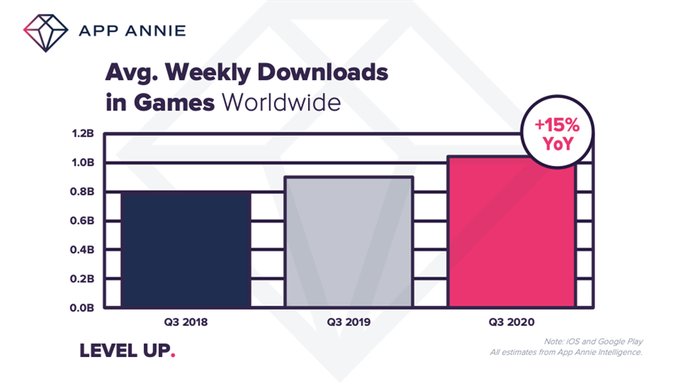 Consumers also spent over $20 billion on games in Q3, the largest quarter ever. By year-end, App Annie forecast mobile gaming will extend its lead over desktop by 2.8x and over console gaming by 3.1x.

Game downloads reached 14 billion in Q3, with downloads up 20% year-over-year on Google Play to around 11 billion. On iOS, consumers downloaded 2.6 billion games. Because of this, games accounted for a higher share of overall downloads on Google Play (45%) compared with iOS (30%).