Palantir is preparing for its public debut tomorrow morning on the NYSE (after 17 years), and now we are getting some data on how the company’s shares are being valued by investors.

The NYSE announced that the company, which will be traded under the ticker PLTR, will have a reference price of $7.25 per share. Palantir is pursuing a direct listing, and so a reference price is merely a guide from the market to investors, and does not represent an actual trading price.

According to Palantir’s after-hours filing with the SEC this afternoon, the company has 1.16 billion Class A shares, 484 million Class B shares and 1 million Class F shares on its cap table outstanding today, or a total of roughly 1.64 billion. Only Class A shares will trade, and Class B and F shares are convertible to Class A shares on a one-to-one basis. On a fully diluted basis, which Palantir says represents 2.2 billion shares total according to its most recent S-1 filing, the company is valued at $16 billion. The difference between those two aggregate numbers comes from outstanding stock performance grants, warrants and other financial instruments.

The company will begin trading tomorrow morning, and as it is pursuing a direct listing, it will raise no primary capital as part of its debut. 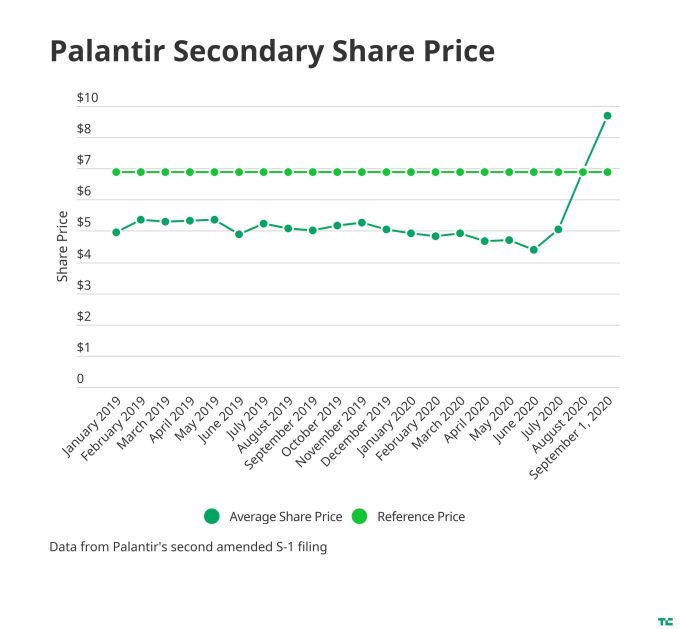 We looked at Palantir’s stock price over time based on internal trades, which have gone from around $5 a share at the beginning of January 2019 to $9.17 a share earlier this month as the company prepped its prospectus to go public. A reference price of $7.25 is below those last trades, and also below a $10 price point that The Wall Street Journal reported on last week from Palantir bankers.

Of course, a reference point, much like an IPO price, is a mostly made-up number, and the real value of these shares will emerge from the market tomorrow as traders buy up shares from insiders.

In its afternoon filing today, Palantir said that approximately 475 million shares will be available for trade, with the remainder of the company’s shares locked up. Palantir pioneered a direct listing with a lockup, and so we will also see how this configuration affects its share price in the coming months as more shares hit the market.

In its 5th filing with the SEC, Palantir finally admits it is not a democracy

Acapela, from the founder of Dubsmash, hopes ‘asynchronous meetings’ can end Zoom fatigue

Acapela, a new startup co-founded by Dubsmash founder Roland Grenke, is breaking cover today in a bid to re-imagine online meetings for...

European entrepreneurs who want to launch startups could do worse than Switzerland. In a report analyzing Europe’s general economic...

“I have to choose my words carefully,” says Joe Castelino of Stevens Creek Volkswagen in San Jose, California, when asked about...

In memory of the death of Quibi, here’s a quick sendoff from four of our writers who came together to discuss what we can learn from...

Plagued with growth issues, Quibi, a short-form mobile-native video platform, is shutting down, according to multiple reports. The...